It hasn’t been an issue for the several years this server has been in service. Newer drives will likely have a little better performance but the users won’t notice it. I’m leaning towards a new RAID 5 array for ease of transition since performance isn’t a huge issue, but I wanted to get the opinion of those more experienced than I. For details and our forum data attribution, retention and privacy policy, see here. And you are correct, the 2 drive fault tolerance is only true if the 2 drives are in opposite mirrors. Any ideas on how I might be able to get Ubuntu installed on this thing? 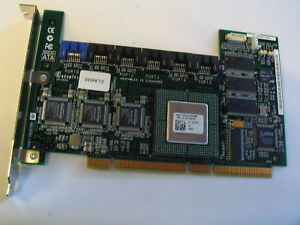 Want to add to the discussion? If I decide to go RAID 5, I’d assume I can just install the new array, image the old array to the new one, then remove the old drives and install new ones in their physical place as hot spares for the new array.

Submit a new text post. You might be able to get a little more performance by riad the array into RAID I’ve tried swapping the card with a known good card, and there was no change.

For details and our forum data attribution, retention and privacy zata, see here. I’m planning on leaving this employer in the very near term to move about 80 miles away.

Once I’ve decided on the configuration, what’s the best way to move the existing data including the Windows installation over to the new array? Also, isn’t RAID 10 only tolerant of two drive losses provided you don’t lose two drives on the same mirror. So you want to be a sysadmin? I’d like to replace the aging drives rald the RAID 5 array with rqid modern enterprise drives and add in at least one hot spare.

But I wouldn’t wait a few days if I had a drive die. I don’t see upgrading the controller as an option.

If the CERC can only for 1. Get at least a hot spare in the server.

The drives all show up fine in sats onboard utility, and the array is in an optimal state. My goal is to provide a few days of safety should a drive die and I’m unable to get on site within 24 hours. Ubuntu Forums Code of Conduct. Thinking about it more critically, it would be adding more complexity than it’s worth.

If you can’t upgrade the controller, then the CERC should work just fine for you. The users don’t complain about performance currently, I was just thinking it would be nice to get riad performance out of the upgrade. So that’ll be roughly or so after all is said and done. Checkout the Wiki Users are encouraged saata contribute to and grow our Wiki.

Now I’m wondering if I should just go back to Windows with it, since it doesn’t look like this hardware is supported by Ubuntu. As long as you keep on top of your RAID monitoring, this should give you plenty of speed, and security. I read somewhere that the driver for the RAID card had been removed since it was such old hardware, but that it still existed under Looks like I’ve got some after hours OT coming next week.

Ccerc you are correct, the 2 drive fault tolerance is only true if the 2 drives are in opposite mirrors.

You might try upgrading to a new er PERC controller. More details on the rules may be found in the wiki.

Looking for some advice on to how best improve fault tolerance and possibly disk performance in this oldish Dell PowerEdge This isn’t a production server or anything, just an old cast off I was able to get my hands on and wanted to try messing saa with Ubuntu for the first time.

Also consider just throwing in another drive as a spare and then putting the rest of the money toward a server upgrade down the road.